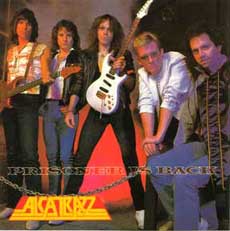 Only a 1980's hair metal band could name themselves after one of the most notorious prisons in the world and then misspell the word.  Although Alcatrazz had a smaller following in the USA, they were big in Japan.

Alcatrazz had a rich history of producing albums throughout the 80's.  A few of you might remember that MTV actually gave the song "Island in the Sun" greater than average air time back in 1984.  In the early days, Alcatrazz featured the freaky fingered Yngwie Malmsteen as their axe man, but Yngwie was gone by 1984 in pursuit of his lucrative solo career.  However, the loss of Yngwie wasn't the end for Alcatrazz, as they quickly picked up wild man Steve Vai for their 1985 release, Disturbing the Peace.  Just like a Hollywood relationship, Vai didn't stick around.  By 1986, Vai had moved on to his new love:  Diamond David Lee Roth.  Wow.

All in all, with the exception of a few live releases and a greatest hits album, Alcatrazz released three albums in the 80's.  Nevertheless, we have always considered Alcatrazz a band worth mentioning when it comes to 80's heavy metal.

The Alcatrazz Discography is as follows: