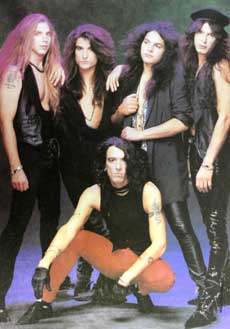 Arcade was a metal band formed in 1992 by ex-Ratt (at the time) vocalist Stephen Pearcy and Cinderella drummer Fred Coury.  Arcade’s first self-titled release hit shelves in 1993.   This album featured the song “Nothin’ to Lose” which received a decent amount of air time.  The band went on tour with Bon Jovi the same year and even played at the Milwaukee Metal Fest (1993).

Considering how late in the game Arcade got started, it is a wonder they were allowed to produce another album.  They released A/2 in 1994, an album that was a bit on the heavier side than their debut.  Fans of Stephen Pearcy with Ratt will really like their debut album, but their second may be a bit too raw for most of you.  Arcade was done by 1995 as members went on to other projects.  In the years after, Pearcy had an on-again off-again relationship with Ratt.

The Arcade Discography is as follows: