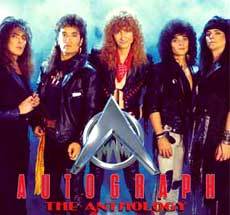 Autograph Says It Loud And Clear “If It’s Too Loud You’re Too Old” Promo Sticker
$0.99