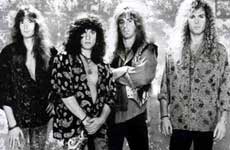 Badd Boyz was an early 1990’s project of Paul Shortino, managed by Wendy Dio (Ronnie James’ wife).  Shortino had been the lead singer in the 1980’s the band Rough Cutt and with Quiet Riot on one album (1988).  He also participated on the Hear ‘n’ Aid benefit album.  At the same time, Shortino was working on a project with J.K. Northrup.  In 1993, the duo released an album titled Back on Track, which is marketed as “Paul Shortino featuring Jeff Northrup”.

The Badd Boyz album was not released until 1993, but it was recorded in 1989.  The band featured the guitar talent of Mitch Perry, who had played previously for Steeler, Talas, Heaven, and even MSG.  Shortino’s vocals are very good for hard rock/heavy metal, and you really cannot go wrong with either of these albums.

The Badd Boyz and Shortino/Northrup Discography are as follows: