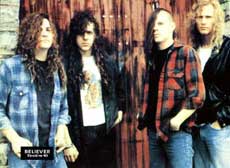 Believer was a Christian thrash metal band that formed in Pennsylvania in 1986 by drummer Joey Daub and guitarist/vocalist Kurt Bachman.  They started out as a melodic metal band, releasing the album The Return in 1987, but they soon turned to thrash metal.  Their first release as a thrash band was Extraction from Mortality in 1989 (R.E.X. Records).  Because Believer was so good, the song “Not Even One” from their first album even ended up on the secular thrash compilation called At Death’s Door in 1990.

Believer released their second album in 1990, titled Sanity Obscure.  The band is known for its technical riffs, complicated structures, and progressive sound.  The band had broken up by 1994, but then reunited a several years later to have another go.

At the time of this writing, the Believer Discography was as follows: