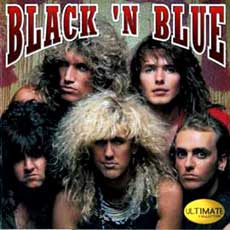 Black 'N Blue, a Portland, OR. band, originally formed way back in 1981 and was first known as "Movie Star".  Their initial break came in 1982 on an independent band compilation album that also featured Ratt and Metallica.  Soon after, the band moved to Los Angeles, signed with Geffen Records, and then produced their 1984 debut album, which featured the song "Hold on to 18", which was featured on MTV.

Their second release, in 1985 (Without Love), was not as well received as their initial offering, but still included the great songs "Miss Mystery" and  "Without Love".  In 1986, Black 'N Blue's producer became Gene Simmons (Kiss), and two more 80's albums followed.  By 1989, the band went their separate ways.

Black N Blue has had a couple of reunions over the years and has played at Rocklahoma.   Many people may not know that the band's vocalist, Jamie St. James, became Warrant's lead singer after Warrant's split with Jami Lane.

We consider Black N Blue to be one of our favorite Hair Metal bands.  Our favorite song is "I Want it All, I Want it Now," which can be found on their Ultimate Collection greatest hits album.  Black 'N Blue is a solid hair metal band, exemplified by the fact that their original albums sell for big money.  This is one of those bands you will not be disappointed with.

At the time of this writing, the Black N Blue Discography was as follows: