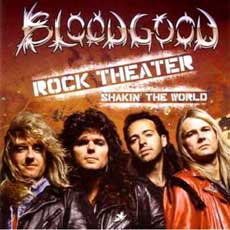 Bloodgood, one of the most recognized 80's Christian metal bands, was formed in 1984 in Seattle, WA by Michael Bloodgood.  Seattle was the stomping grounds for bands like Queensryche and Metal Church in those days, so naturally Bloodgood felt a Christian metal influence was warranted in the area.

Bloodgood, in their own words, was not influenced by other Christian metal bands like Stryper, but instead hammered out their own sound.  We will agree with this as Bloodgood had a heavier edged and less melodic sound than Stryper.  Their 1988 and 1989 albums (Rock in a Hard Place and Out of the Darkness), are available as a set.

In the late 1980's, Bloodgood found more popularity in Europe than in the USA, and often included some graphic Christian imagery in their stage show (including the crucifixion of Christ).  Some of their down to earth Christian lyrics and stage show antics had the Christian right slightly up in arms, but we have never been able to figure out what the consternation was all about.

Bloodgood disbanded in 1994, but were resurrected (pun intended) over the years, even working with Stryper.  The band was inducted into the Christian Music Hall of Fame in 2010.  At the time of this writing, Michael Bloodgood was actually a pastor in Washington State (go, Michael!).

At the time of this writing, the Bloodgood Discography was as follows: