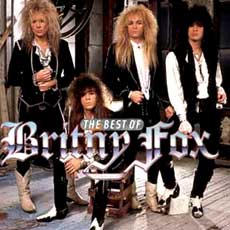 Britny Fox was a Philadelphia band that formed in 1985.  The band sounded a lot like Cinderella, but that shouldn't come as a huge surprise considering that original band line up included the guitarist and drummer from Cinderella.  Rumor has it the band was named after one of Dizzy Dean's (lead singer) welsh ancestors.

Because of the Cinderella connection, Britny Fox easily received a record contract, and their first album in 1988 included the song they are probably best known for ("Girlschool").  Things starting going south for the band shortly after this release when their drummer died in a car wreck.  Nevertheless, things quickly turned around for Britny Fox, and by 1988, they were Metal Edge Magazine's People's Choice for Best New Band.

After the release of their second album, Boy's In Heat, being a band member became a revolving door.  Many people do not know this, but on their third album, Bite Down Hard, guest musicians Zakk Wlyde (Ozzy Osbourne) and Rikki Rockett (Poison) helped out.

Britny Fox reunited in 2000 and 2007.  The only other known album to have been released by the band was Springhead Motorshark in 2003.

At the time of this writing, the Britny Fox Discography was as follows: