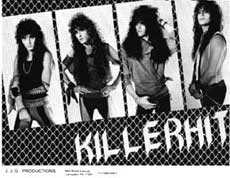 Brunette was another one of those promising metal bands from the late 1980’s that never signed a major record deal.  They named themselves after the fact that each one of them had dark hair, which was a bit usual for a hair metal band.  The band formed around 1987 and even included Doug Aldrich on guitar for a short time.  Years later, their hair metal demos were finally released, which is why we include them here.

Their closest claim to fame came in 1989, when Francis Ford Coppola’s song chose them to star in a film called "Smash, Crash and Burn”.  Unfortunately, that project was nixed and the band split up in 1991.  A few of the members of the band would later form the band Hardline (including Hardline vocalist Johnny Law).  Some of the Hardline songs were actually re-arranged Brunette songs.  Brunette was a solid band.  If you are a fan of Johnny Law in Hardline, then you might check Brunette out.

The Brunette Discography is as follows: