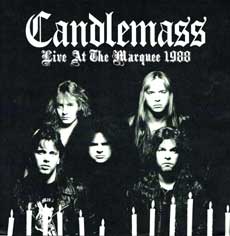 Candlemass was a "doom metal" band that formed in Sweden in the mid 1980's.  For those of you who don't know, "doom metal" is a gloomy sort of music genre that not only includes lyrics that are not really uplifting at all, but also includes a musical cadence that is a bit depressing as well.  Doom metal bands sound a lot like old Black Sabbath music, and in the case of this band, there is a lot of talking going on at the start of and between tracks.  Candlemass released their first album in 1986 (Epicus Doomicus Metallicus), and was immediately taken under the wings of Swedes who fell in love with them.  Switching vocalist around 1987, the band continued releasing new material until a breakup in 1994.

BY the late 90's, Candlemass was back in action.  At the time of this writing in 2016, they were still active, yet with another new vocalist.  In 2013, Candlemass was voted the greatest Swedish metal band by a Swedish rock magazine, and although they initially said their 2012 album would be their last, rumor has it there may be more to come.

The Candlemass Discography is as follows: