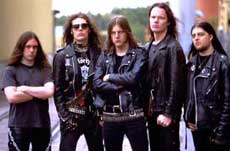 Crown of Thorns was an early 90's metal band that featured vocalist and song writer Jean Beauvoir (this band is not to be confused with the I.R.S. Records band also called Crown of Thorns).  Beauvior not only had a voice for metal, but also experience having been part of a band called Voodoo X (they released an album called Vol. 1 The Awakening in 1989).  With the help of Paul Stanley, the band released their first album in 1993 (self-titled), and some of you may remember the song "Hike It Up" from this album.

Crown of Thorns was a bigger hit in the UK after their debut (they toured with Bon Jovi).  They did not begin a tour in the USA until 1995.  The band continued their activities well into the 2010's.  Their sound has been relatively consistent over the years.

At the time of this writing, the Crown of Thorns Discography was as follows: