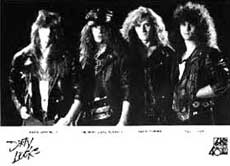 You can see by looking at the picture to the left how this band got the name "Dirty Looks."  Dirty Looks had roots in Erie, Pennsylvania.  Several of the original Dirty Looks band members came from a local PA band called Crossfire. Dirty Looks was formed in 1984 after several Crossfire members moved to California to make a go of things.  After some time in CA, the band returned to PA, and the band's line up began to fluctuate.  The one member who remained constant throughout the turmoil was lead singer Henrik Ostergaard.

By 1988, Dirty Looks managed to begin hitting the charts with the release of the album Cool from the Wire, an album that featured the song "Oh, Ruby', which received a solid rotation on MTV.  And many of you may even know the song "Cool from the Wire", which will often pop up on hair metal retro radio shows.

By 1993, Dirty Looks had broken up, with members all heading off to different projects.  Throughout the 90's and even as late as 2008, Dirty Looks was still releasing new material.  Dirty Looks has been described as sounding a lot like AC/DC (not sure we agree with that).

Sadly, in 2010, Dirty Looks bass player Greg Pianka died in a knife fight, and Henrik Ostergaard died in 2011 of liver failure.  Having said that, it is probably safe to say the Dirty Looks Discography will remain the same as it currently stands: