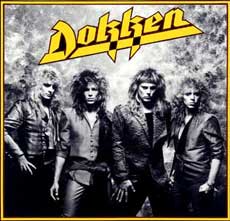 The band Dokken, which formed way back in 1978 by front man Don Dokken,  had an extremely long 80's music career and is considered by many to be a quintessential 80's heavy metal band.  Some of you may even remember that Dokken was nominated for a Grammy back in 1989, and of course who can forget their contribution to the soundtrack for third installment of the Nightmare on Elm Street movies ("Dream Warriors").

In the early years, Dokken started out as the Los Angeles band, Airborn, but had to change their name after it was discovered another band with the same had been signed to a record contract.  It was while helping the Scorpions with background vocals for the album Blackout that Don Dokken met up with the band Accept's manager, who secured Dokken a contract and Breaking the Chains was released.  Soon after, George Lynch and Mick brown, from the band Xciter, joined Dokken.  Dokken's first tour in support of their first album was with Blue Oyster Cult in 1982.  Due to lackluster sales and lack of funds, Dokken almost dissolved shortly thereafter.

By 1984, the release of the album Tooth and Nail had turned things around for Dokken.  The album, which Billboard charted at number 49, featured the songs "Into the Fire", "Just Got Lucky", and "Alone Again".  Their third release, 1985's Under Lock and Key, also featured some hit songs, including "In My Dreams" and "It's Not Love".  The album Back for the Attack, which was released in 1987, charted at number 13.  It featured songs like "Burning Like a Flame", "Heaven Sent", and "Prisoner".   Over the years, Dokken toured with bands such as Judas Priest, Dio, Aerosmith, Van Halen, Kingdom Come, Metallica, AC/DC, Scorpions, and Aerosmith

In 1989, the band broke up due to creative differences between Don Dokken and George Lynch.  Many of you are probably familiar with George's solo effort, Lynch Mob.  Don Dokken released a solo album during this time called Up from the Ashes (1990).  In 1995, George Lynch returned to help with a new album called Dysfunctional.  Soon after, Lynch left the band again, and Dokken released several more albums with the help of veteran guitar player's like Europe's John Norum and Winger's Reb Beach.

Dokken continued to release new material and tour during the heyday of metal mega-reunion tours.  In 2008, Dokken released a new album calledLighting Strikes Again, which did relatively well on the charts and has been described as old school Dokken.  At the time of this writing, the Dokken Discography was as follows:

DOKKEN BACK FOR THE ATTACK WOVEN PATCH
$9.99