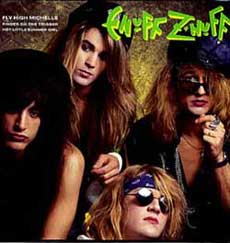 Enuff Z' Nuff was a glam metal band that formed way back in 1984 in Chicagoland.  They were a little better on their spelling when the band first formed, originally calling themselves "Enough Z Nuff".  In reality, one of the founding member's last name was "Z'Nuff" (bassist Chip Z'Nuff), thus the origins of the band name.

In many ways, Enuff Z' Nuff never took off in the same way that some other glam bands took off, but their self-titled album from 1989 did bring us two memorable 80's songs: "New Thing" and "Fly High Michelle".  The videos for these two songs received significant rotation on MTV and the band's glam looks were often parodied on the 90's MTV show Beavis and Butthead.

By 1991, Enuff Z' Nuff had toned down their glam rock image for the release of the album Strength, an album that actually won them "Hot Band of the Year" by Rolling Stone magazine and an appearance on the David Letterman Show.  The band's 1993 release, Animals with Human Intelligence, was also met with good reviews, but as we all know, 1993 was essentially on the post tail end of 80's heavy metal.

As the years went on, Enuff Z'Nuff continued to produce, although the band members came and went.  The band maintained a rather large following overseas, and was even featured on the Howard Stern Show.  In 2004, the band's guitarist from their heyday passed away from a drug overdose, and their current drummer died of cancer.  In 2009, Enuff Z'Nuff released a new album with the help of Jake E. Lee on guitar.

The ENuff Z' Nuff Discography presently is as follows (and yes, the ? album is the name of the album):