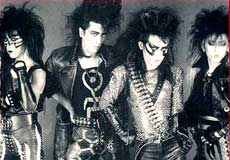 EZO was a Japanese heavy metal band that started out as a band called Flatbacker in 1982.  As Flatbacker, they released three albums in Japan.  In the mid 1980’s, they moved to the USA and changed their name to EZO at the behest of Gene Simmons (Kiss), who produced it.  In the USA, EZO released two albums on the Geffen label.  Their first album (self-titled) was released in 1987 and featured the song “House of 1,000 Pleasures”.  Their 1989 release was titled Fire Fire.

Shortly after the band’s 1989 release, they broke up.  The vocalist joined the band Loudness and others went on to other projects.  EZO is another one of those underrated bands that deserve a revisit.  If you are an old school metal fan looking for something from the old days that you have not heard before, then we recommend you check out the last two albums by EZO.

The EZO Discography is as follows: