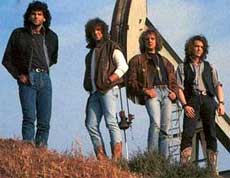 Giant was an American metal band that formed in 1987 by two of the founding members of the Christian band White Heart (David and Dann Huff).  After landing a record deal, they released their first album, Last of the Runaways, in 1989.  This album was a major success for the band.  Three songs from the album made the top 20 on the US Mainstream Rock charts:  “I’m a Believer”, “Innocent Days”, and “I’ll See You In My Dreams” (which also landed at no. 20 on the US Hot 100 chart).

Giant’s second release, Time to Burn (1992), did not do as well, but still had a top 20 US Mainstream Rock chart hit with the song “Chained”.   Giant broke up shortly thereafter, only to re-group in the early 2000’s.  They were still active well into the 2010’s with a new vocalist.  Fans of AOR metal will really like Giant, including their newest material.  The Giant Discography is as follows: