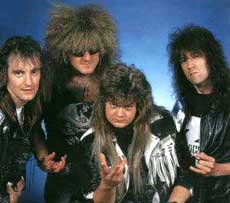 Grim Reaper was a British metal band that formed during the late 1970’s.  After winning a battle of the bands contest in the early 1980’s, the band landed a record deal and released their first album, See You in Hell, in 1983.  Their follow-up release, 1985’s Fear No Evil, fared better than its predecessor, and people back in the states began to take notice.  Their third release, Rock You to Hell, was the album that featured the title track (and music video) that many people are familiar with.

Due to legal battles with their label, Grim Reaper disbanded in 1988.  Members of the band went on to other projects.  In 2006, they reformed, once again with vocalist Steve Grimmett at the helm.  The band was active well into the 2010’s.  Grim Reaper was a pretty good band, although we always felt that the entire “hell” theme was stupid.  The Grim Reaper Discography was as follows:

Grim Reaper Poster Rock You To Hell The Flat
$19.99

GRIM REAPER,ROCK YOU TO HELL,SEW ON GOLDEN AND RED EMBROIDERED LARGE BACK PATCH
$12.99