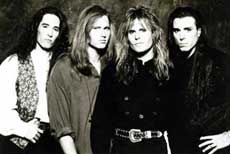 Guardian (also known as Gardian) was a Los Angeles Christian metal band that formed in 1984.  The original name of the band was "Fusion", and they were known for performing in outfits made of faux armor (this is an allusion to Ephesians 6; "...putting on the full armor of God"). By 1985, the band had earned a recording contract with Enigma records through a Stryper connection.  After finding out the band name "Fusion' was taken, they changed the name of the band to Gardian.

In 1988, the band added the U to to their name.  In 1989, Guardian released their first album, First Watch, that was produced by Stryper's guitarist (Oz Fox).  Members of the band changed frequently. including the lead singer, Paul Cawley.  Their second album, Fire and Love, was released in 1991 and actually received rotation on Headbanger's Ball (the album was produced by the Elefante brothers).  After a 1992 tour with Stryper, the band released their third album in 1993 (Miracle Mile).  This album was a bit of a departure from earlier music according to some, but the sound is clearly metal.  Miracle Milereached number 5 on the CCM chart (Contemporary Christian Music).

Post 80's metal era heyday, Guardian continued producing albums, even releasing some in Spanish.  Throughout the years, the band has re-surfaced at various Christian metal reunion shows.  At the time of this writing, the band was currently active.  Guardian's Discography was as follows: