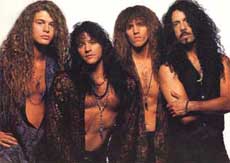 Heavy Bones was a Hollywood glam metal band that came too late in the game to have any real chance at survival.  The band was formed in 1990 by Cats In Boots vocalist Joel Ellis and they received a record deal with Reprise Records shortly thereafter.  They released their first album (and only album) in 1992 (self-titled).  Some of you may have seen the band on Headbanger’s ball on the video for the song “4:AM T.M”, or you may remember the song “Turn It On”.

Sales of the band’s first album were lackluster, and they broke-up shortly thereafter.   If you are an 80’s metal fan looking for something old that is new to you, then you will probably like Heavy Bones.  The Heavy Bones Discography is as follows: