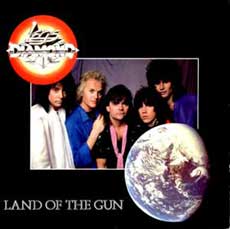 Legs Diamond was an American rock/metal band that formed in Los Angeles in the 1970’s.  Their debut album, which was released on Mercury records, hit shelves in 1976.  In 1980, the band broke up, but reformed in 1984 after realizing that they had a cult fan base.  The band has often been compared to Deep Purple given their use of synthesizers.  As they 80’s rolled on, they tended to record harder edged rock.  Their later work (example The Wish, 2007) is even much harder than their 1990 release.

Legs Diamond continued producing well into the 2000’s.  In 2010’s, the band was known to still play a gig or two and writing new material.  If you are looking for straight-forward metal, then Legs Diamond is not for you.  If you want something a little different, and like Deep Purple, then check them out.  We have not been disappointed in any of their releases.

At the time of this writing, the Legs Diamond Discography was as follows:

The BABYS and Legs Diamond at Yorkville Theater in NY 1977 music biz review
$4.95