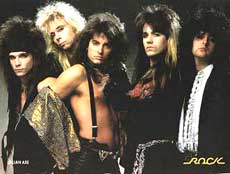 Lillian Axe is somewhat of an underrated 80's metal band.  The band has New Orleans roots and was the first hard rock act to be inducted into the Louisiana Music Hall of Fame.  With roots dating back to 1983, within three years Lillian Axe had made a name for themselves as a great live metal act on the southern circuit.  It was during an opening performance for a concert featuring Queensryche, Ratt, and Poison that they caught the attention of MCA Records.

By 1987, the band's lineup had solidified, and in 1988, the Lillian Axe self-titled release hit the shelves.  This album was produced by Robbin Crosby (Ratt).  Many of you will remember the song "Dream of a Lifetime" from that album and its subsequent MTV video.  In support of this initial release, Lillian Axe toured with bands like Krokus, Stryper, and Lita Ford.  The bands 1989 release, Love and War, met with even greater commercial success and featured the song "Show a Little Love".  Not long after this release, MCA dropped the band and they were picked up by Grand Slam Records.  They released Poetic Justice in 1992 on this label, which became their greatest commercial success to date.  You may remember the song "True Believer" and the cover "No Matter What" from this album.

After extensive touring in the early to mid 1990's, Lillian Axe had had enough of the road and decided to take a hiatus.  The band did release an album called Fields of Yesterday, which is a compilation of old previously unreleased 80's metal.  As the years have gone on, Lillian Axe has continued to produce, although band members (including the vocalist) have changed.  At the time of this writing, Lillian Axe could be found touring at the mega metal shows like Rocklahoma and Fire Fest (UK).

The Lillian Axe Discography was as follows: