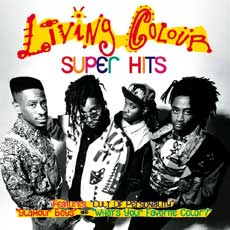 Living Colour (or Living Color) was an interesting all Negro band that played what is best described as funkadelic metal.  Living Colour was a New York City band that formed in 1984 by English born guitarist, Vernon Reid, and was known for songs that demonstrated the fallacies of racism and Eurocentrism.

By 1986, the band line up had solidified with Corey Glover on vocals.  Their debut album, Vivid, was released in 1988 and featured the song "Cult of Personality," a song that one the band a 1990 Grammy for Best Hard Rock Performance.  Vivid peaked at #6 on the Billboard Top 200.  In support of this album, Living Colour toured with bands like Guns 'N' Roses and The Rolling Stones.  The bands 1990 release, Time's Up, is an even more eclectic mix of jazz, rap, blues, punk, and metal than its predecessor.  Time's Upcharted at #13 on the Billboard Top 200.

By 1995, the band had split, and members went on to form solo projects.  The band reunited in the early 2000's to release Collide0scope.  As the decade went on, Living Colour could be found at mega metal shows like Rocklahoma and back in the studio.  At the time of this writing, the Living Colour Discography was as follows: