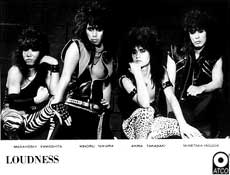 Loudness was one of the few Japanese metal bands whose sound penetrated the ears of rockers in the evil West.  Loudness was formed way back in 1980 and was the first Japanese metal act to garner an American recording contract.  At the time of this writing, Loudness had released 23 studio albums, 5 of which were via American labels.

The band Loudness was a pioneer in Japanese Heavy Metal, and Birthday Eve, which was released in 1981, started the band on it's way to mainstream popularity in Japan.  By 1984, Loudness had moved to Europe and began working on worldwide notoriety.  The band's 1985 release, Thunder in the East, was their first release on an American label.  This album charted at #74 on the charts, in part due to the single "Crazy Nights".

The Loudness 1986 release, Lighting Strikes, charted at #64.  You may remember the song "Let It Go" from this album.  Loudness began losing Japanese fans after this release to to the pop metal nature of the tracks.  But, those of us in the USA who loved the polished metal sound, we ate it up (and still do).  Similar in sound was Hurricane Eyes and 1988's Jealousy.  Not long after their 1988 release, the record label convinced Loudness to hire an American vocalist to increase their mainstream success.  However, the affect of this move was to further isolate Japanese fans and do nothing to increase their popularity in the USA (and of course there was the timing issue of new metal in the early 1990's).

Although the band did not officially dissolve after this, band members continue to shift around.  There was some activity in the mid to late 1990's, but it wasn't until 2001 that all original band members were back together again and enjoying huge success again in Japan.  In 2008, the band's drummer died of liver cancer, but Loudness continued on.  At the time of this writing, the Loudness Discography was as follows: