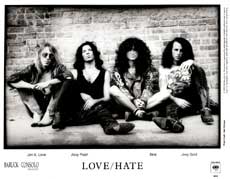 Love/Hate was a Los Angeles glam band that formed in 1985 as a band first called Datacian.  The did not start out as a metal band, but instead an electronica type band.  By 1986, they had changed their name to Love/Hate and searched for a record deal.  After settling on playing heavy metal, by 1987 they had managed to get a couple of their songs included on a few movie soundtracks (Critters 2 and A Nightmare on Elm Street 4).

By 1988, Love/Hate had landed a deal with Columbia, and their debut album, Blackout in the Red Room, was released in 1990 (made it to number 154 on the Billboard Top 200).  Some of you may remember the song “Rock Queen” from this album as well as the song “Why Do You Think They Call It Dope”, which was played on Headbanger’s Ball.  For the next few years, they toured with Dio, AC/DC, Ozzy, and Skid Row.  Not long after, Columbia dropped the band, but they managed to label shop and continued producing (they had some success in the United Kingdom).  They were still known to be active in the 2010’s.  The Love/Hate Discography is as follows:

LOVE/HATE Why Do You Think They Call It Dope vintage shape new record co sticker
$5.95

VHS LOVE/HATE Why Do You Think They Call It Dope, Blackout, MTV Angel acoustic
$69.99