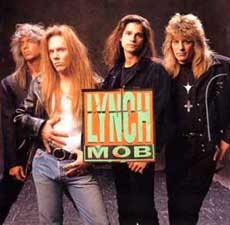 The band Lynch Mob, founded by Dokken guitarist George Lynch, was essentially an off-shoot of Dokken in the late 1980's after dissention in the band.  George managed to score Dokken drummer Mick Brown, and the band released Wicked Sensation in 1990, an album that reached Gold status.  You may remember the songs "Wicked Sensation", "River of Love", and "She's Evil but She's Mine" from this album.

Shortly after the initial release, vocalist Oni Logan was fired from the band due to his excessive rock lifestyle, and they released a self-titled follow upalbum in 1992 after hiring a new vocalist.  You may remember the songs "Tangled in the Web" and the Queen cover of "Tie Your Mother Down".  Lynch Mob temporarily disbanded in 1995 as George Lynch and Mick Brown reunited with Dokken.  Lynch was let go from Dokken in 1998, so naturally he resurrected Lynch Mob, but with new members.  Wrap metal fans would be happy to know that the Lynch Mob's 1999 release, Smoke This, has been called "Lynch Bizkit".  Since then, Lynch Mob has broken up and reunited several more times.

In 2008, Lynch had the opportunity to join back up with Dokken for Rocklahoma, but he chose to bring back the vocalist from the Wicked Sensation album, essentially losing a chance for reconciliation with Don Dokken.  Fans of Dokken may be interested in Lynch's Revolution (2003) which is a collection of some of Lynch's old Dokken stuff, but with a heavier sound.

The band was still active well into the 2010's.  In 2015, Lynch Mob released a new studio album (Rebel) with all original members.  The Lynch Mob Discography, currently, is as follows: