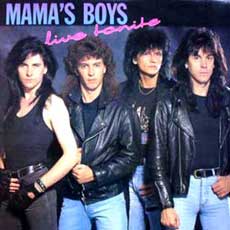 Mama’s Boys were an Irish metal band founded by the McManus brothers in the late 1970’s.  By the early 1980’s, the band had made a name for themselves and were asked to warm-up for the band Hawkwind on their tour through the United Kingdom.  They released their first album, Plug It In, in 1982.  It featured the hit Irish song “Needle in the Groove”.  Soon after, they released a version of Sade’s “Mama Weer All Crazee Now”, which did fairly well.  It was the band’s 1985 release, Power and Passion, that broke them into the Billboard Top 100 in the United States.

In the early 1990’s, founding member Tommy McManus died, and so brothers Pat and John decided that was the end for the band.  We are a bit surprised that Mama’s Boys did not do better in the USA, especially with their 1987 release, Growing up the Hard Way, which was a radio-friendly AOR album.  In any event, we own their albums and enjoy listening.  If you want a taste of their entire career, they have a greatest hits album called “The Collection” that was released in 2000.  The Mama’s Boys Discography is as follows: