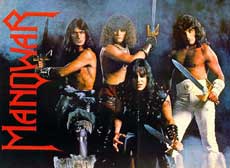 These guys were like the Schwarzeneggers of heavy metal.  Manowar was an Auburn, New York band that started way back in 1980.  They are primarily known for incorporating mythological undertones into their music, a sort of a Lord of the Rings meets William Wallace thing (Power Metal, Viking Metal).  Manowar never reached the level of commercial success that many metal bands did, but they are one of a handful of bands with a cult following.

In 1981, Manowar secured a record contract with Liberty Records, and in 1982, the band released Battle Hymns.  Orson Wells even had a narration part in the song "Dark Avenger" on this album as well as their second release, Into Glory Ride.  By 1983, Manowar had a new contract with Megaforce Records, a contract they signed in blood...literally.  The band continued producing throughout the 80's and touring (especially in the UK), but it is probably their 1988 release, Kings of Metal, that was their greatest commercial success.  You may remember the songs "Kings of Metal", "Heart of Steel", and "Hail and Kill" from this album.

At the time of this writing (2012), even though the lineup of the band has changed from time to time, Manowar was still on the warpath, continuing to produce new material and touring the world.  The Manowar Discography is as follows: