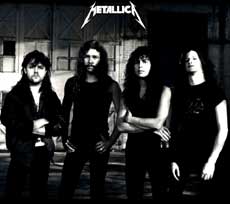 If you can some how incorporate the word "metal" into the name of your rock band, then you are automatically cool by default.  Metallica is probably the most recognizable thrash metal band in the history of heavy metal.  Metallica. The band formed back in 1981 in L.A. as vocalist/guitarist James Hetfield responded to a newspaper advert published by drummer Lars Ulrich.  A second ad for a lead guitarist was answered by Dave Mustaine (Megadeth).

In 1982, Metallica recorded their first song, "Hit the Lights", for a compilation album called Metal Massacre.  In 1983, due to drug abuse and violent behavior, Mustaine was fired from the band and replaced by Kirk Hammett.  Metallica's 1983 debut album was originally titled Metal Up Your Ass, but due to label contention, they agreed to change it to Kill 'Em All. Interestingly enough, this album was not initially a hit record.  However, by 1988, it had reached 120 on the Billboard Top 200 as new fans began to dig up previous releases.

In 1984, Metallica released Ride the Lightning.  This album charted at 100/200 and featured songs like "For Whom the Bell Tolls", "Fade to Black", and "Creeping Death".  In 1986, Metallica released Master of Puppets, an album that reached 29 on the Billboard Top 200.  Many of you may remember the bus accident in 1986 that killed Metallica's bass player, Cliff Burton.  In 1988, And Justice for All was released.  This album was one of the most successful for the band and earned them a Grammy nomination in 1989 (not to mention all the airplay on MTV for the song "One").  The most successful?   The 1990 release, affectionately referred to as "The Black Album", hit number 1 in 10 countries.

As the years have gone by, in between rehabs and lineup changes, Metallica has continued producing new material and touring the world.  At the time of this writing, the Metallica Discography was as follows: