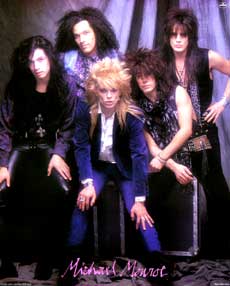 Michael Monroe, born Matti Antero Kristain Fagerholm in Finland, started his career as the vocalist for the band Hanoi Rocks (1979 to 1985).  Not long after Hanoi Rocks member Nicholas Dingley (Razzle) died in a car crash with Vince Neil (Motley Crue) at the wheel, the band broke up and Monroe pursued a solo career.  Monroe released his first solo album in 1987 (Nights Are So Long).  Although the album was not a major success, it did catch the eye of Mercury Records, and his second album, Not Fakin’ It, was released on that label.  Some of you may remember it was around this time that Monroe hosted Headbanger’s Ball on MTV.

Monroe’s solo effort was not the huge success he had hoped, so he decided in the early 1990’s to form a band with Steve Stevens (Billy Idol) called Jerusalem Slim.  In 2002, Monroe went back to a reformed Hanoi Rocks, which lasted until 2009.  In the late 2010’s, Monroe was working with his new band (called the Michael Monroe Band).  The Michael Monroe Discography is as follows: