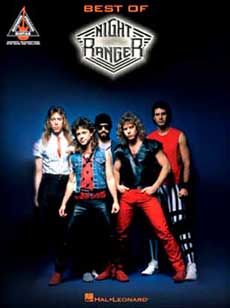 We didn't know that Will Farrell played in Night Ranger, did you?  Look at the guy second from the right.  Isn't that Will?  Okay, so it isn't Will.  Night Ranger has roots back to a band called Rubicon from San Francisco.  After Rubicon split, three members of the band started a new band called "Stereo":  Those Rubicon members were bassist Jack Blades, guitarist Brad Gillis, and drummer Kelly Keagy.  After a few more band additions, the band changed their name in 1980 to "Ranger".  Due to copyright infringement of another band with the same name, "Night Ranger" was chosen.

Night Ranger's first release was Dawn Patrol in 1982 (many of you will remember the song "Don't Tell Me You Love Me" from this album).  The band toured with Ozzy Osbourne and ZZ Top to support this album, and Brad Gillis was even tapped to fill in for the late Randy Rhoads during one particular tour.  Night Ranger went on to produce several more 80's album, but their popularity began to wane after the 1987 release of Big Life.  The album that the band is probably most recognized for is 1983's Midnight Madness.  Many of you will remember the songs "Rock in America" and "Sister Christian" form that release.  "Sentimental Street", "Four in the Morning (I Can't Take Anymore)", and "Goodbye" were all hit songs on the bands 1985 album, Seven Wishes.

By the early 1990's, that band broke up as Jack Blades left to join the super group Damn Yankees with Tommy Shaw (Styx) and Sweaty Ted Nugent.  The original members had a reunion in 1996, and although the material did not fair as well in the states, it was very successful in Japan.  At the time of this writing, the Night Ranger discography was as follows: