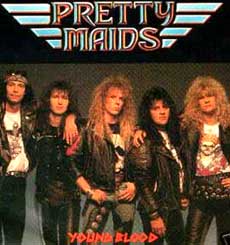 Okay, so "Pretty Maids" might not be the heaviest of metal band names out there, but it didn't matter for these guys, as their metal was no doubt heavy.  It is probably best that they dropped their original band name:  "Pretty Pretty Panick".  Pretty Maids hailed from Denmark circa 1981.  Pretty Maids have opened up for acts such as Whitesnake, Saxon, Deep Purple, Metallica, and Black Sabbath.

Pretty Maids released their debut EP in 1983 under an English label, but after a successful UK tour, CBS records produced their 1984 release, Red Hot and Heavy.  The band's most recognized release, as far as rockers in the USA go, was Future World (1987).  Even though heavy metal was dying by the early 1990's, Pretty Maids continued to release, and they had great success in Japan in the mid 1990's.  Pretty Maids also received kudos in the mid to late 1990's by critics in the USA for their 1995 release, Scream, and their 1997 release, Spooked, both of which are considered on the heavier side for the band.

At the time of this writing, Pretty Maids was still active both in the studio and on the tour circuit.  The current Pretty Maids Discography is as follows: