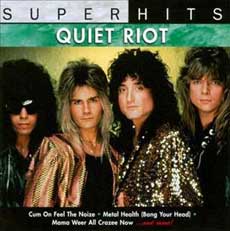 Where would 80's heavy metal been without Quiet Riot.  Quiet Riot was formed in 1973 by Randy Rhoads (later with Ozzy) and bass player Kelly Gami (Rudy Sarzo joined in 1978).  The band originally started out as "Mach 1", then they changed their name to "Little Women", and finally to Quiet Riot in 1975 as the band picked up vocalist Kevin Dubrow and drummer Drew Forsyth.

In their early Los Angeles days, Quiet Riot was on the club circuit with Van Halen.  They secured a record deal with Sony in 1977, but their initial album, and their follow up 1978 album, were only released in Japan.  By 1979, Rhoads had been hired by Ozzy Osbourne, and the band hired a couple of new guys and changed their name to Dubrow.  In 1982, DuBrow resurrected the name Quiet Riot and hired the crew we know today as Quiet Riot:  Kevin Dubrow on vocals, Carlos Cavazo on guitar, Rudy Sarzo on bass, and drummer Frankie Banali.  The result was a record deal with CBS records and the 1983 release of Metal Health.  Many of you will remember the 1973 Slade cover song "Cum on Feel the Noize", the first metal song to chart in the top 10 Billboard Hot 100 Singles Chart.  The song "Metal Health" from the same album charted at number 1, which made Quiet Riot the first metal band with a number 1 and number 5 song on the charts during the same week.

Although Quiet Riot continued to produce, they were never able to reach the same level as success as they had in 1983.  The band's 1984 release,Condition Critical, was not a total loss, after all, as they received some success by covering the Slade song  "Mama Weer All Crazee Now".  Around this time, DuBrow became rather outspoken regarding Quiet Riot's contribution to heavy metal, which subsequently resulted in Rudy Sarzo leaving the band (he re-surfaced in Whitesnake) and DuBrow's firing in 1987.  The band continued on shortly with all new members.

As the years went on, the original Mental Health era members of Quiet Riot reformed to release new material and go on tour.  The band was seen not only in the studio, but also no heavy metal reunion tours throughout the USA.  In 2007, DuBrow died of a cocaine overdose, and Quiet Riot did continue on henceforth with various new vocalist.  At the time of this writing, the Quiet Riot Discography was as follows: