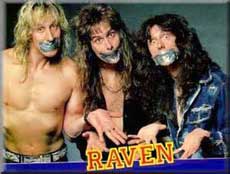 Sure, why not name your band after a big, ugly black bird who picks at the flesh of dead carcasses.  Raven was formed in 1974 in Newcastle, England, and was categorized as one of the "New Wave of British Heavy Metal" bands.  Raven was known for high energy concerts and wild antics onstage.  Raven was known for wearing sports gear on stage, such as helmets, guards, etc. (things a hockey or baseball player might wear) and even using some sports items as instruments.

In the early 1980's, Raven signed with a small label called Neat Records, and their debut album, Rock Till You Drop, was released in 1981.  Wiped Out(1982) was released on the same label, and Raven was becoming a hit in the U.K.  So much so, that Megaforce Records took notice in the USA, and All for One was released in 1983.  The band subsequently toured with Antrhax and Metallica in support of the album (which should demonstrate to readers that Raven is on the heavier side of metal).  By 1985, Atlantic Records had picked up the band and Stay Hard was released in 1985.  Some of you may remember the song "On and On" from this album.

After 1985, Atlantic Records steered Raven to produce more polished metal (a sign of the times).  This shift did not sit well with die hard fans.  Nevertheless, Raven continued to produce and tour.  At the time of this writing, the Raven Discography was as follows:

Autographed/Signed Raven “The Pack Is Back” Vinyl
$89.99