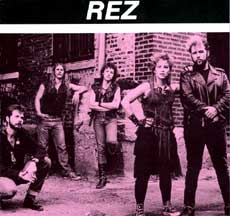 The Resurrection Band (Rez Band or REZ) was a Christian band that formed in 1972 in Milwaukee as a band called Charity.  They moved to Chicago and changed the band’s name based on their main message, to preach the gospel of Jesus.  The band was a forerunner of Christian hard rock with their debut hitting shelves in 1978.  Unfortunately, Christian music labels were leery of this new hard-edged Christian music, so the Rez Band was forced to self-produce their first few albums using donations.  However, Star Song Records decided they had nothing to lose, so they picked up the band, released their 1978 album, and effectively ushered in a new era of Christian music.

The Rez Band continued producing well into the 1990’s, tackling subjects in their music such as racism, AIDS, drugs, prostitution, poverty, divorce, materialism, etc.  The mid 1980’s even found the band’s video for the song “Crimes” being played on MTV.  By the late 1980’s, riding on the wave of their success, they shortened the band’s name to just REZ.  The band’s last studio album came in 1997.  At the time of this writing, their last known public performance was in 2010.  The Rez Band Discography is as follows: