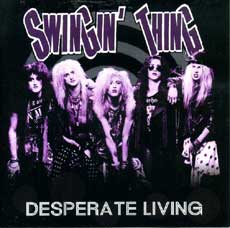 Swingin’ Thing formed in 1988, with a debut performance at the Roxy in 1989.  After spending time on the Sunset Strip, the band released their first album in Japan (EP) before going on tour there and then later toured Venezuela.  They recorded the music video for their song “All that Glitters” in 1992, and things were going well enough for them that Hollywood Records signed them to a record deal in 1993, at which time the band changed their name to “The Things”.

Like many bands that tried to make it in the early 1990’s, it was a no go.  The band recorded a number of songs back in their heyday, and Demon Doll records starting releasing them in 2009.  The Swingin’ Thing Discography is as follows: