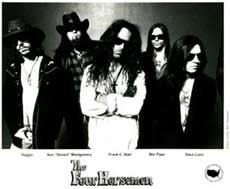 The Four Horsemen was an American blues-influenced metal band that formed in the late 1980’s in Hollywood.  The band released a four-track EP in 1989, and their first full-length album in 1991 (Nobody Said It Was Easy).  Some of you may remember the song “Rockin’ Is Ma’ Business” from this release.  It has been said that the band was influenced by AC/DC, and the aforementioned song is a good example of that influence.

Based on the state of the union of metal in the early 1990’s, and the lead singer’s jail time stints from drug arrests, the band never really took off.  They continued producing throughout the 1990’s and were still active well into the 2010’s.  The band’s original singer, Frank Starr, died in 1999 after a motorcycle accident.

The Four Horsemen Discography is as follows: