Royal Court of China, The 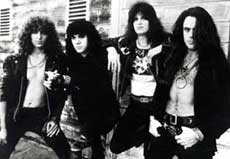 The Royal Court of China was formed in Nashville in 1985.  The band named themselves after the nickname for high quality Chinese Opium.  The band’s initial EP debut (self-produced in 1986) which landed them a record deal with A&M records and a tour with REO Speedwagon, was not a hard rock album.  The band found themselves at odds and quickly split up.  A couple of the band members reformed the band soon after, and their self-titled album was released in 1987.

By 1989, the band decided to take a heavier approach with the release of the metal album Geared & Pinned.  This album is a hard rock album, but still contains some underpinnings of the band’s punk history.  By 1992, the band had split, but did reform again in the 2000’s for a new studio album.  The Royal Court of China Discography is as follows: