Listen for free or download any Tuff track for just 12 cents per song! 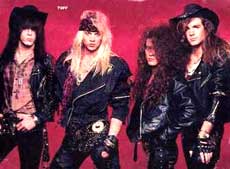 Tuff was a glam metal band that formed in Phoenix, AX in 1985.  The band released their debut EP in 1986 with Jim Gillette on vocals.  Gillette left to form the band Nitro soon after, and Stevie Rachelle took over on the microphone.  Tuff toured the club circuit all over the United States before finding landing a record deal in 1990 (Atlantic Records).  They released their first album, What Comes Around Goes Around, in 1991.  Some of you may remember the song “I Hate Kissing You Goodbye” from this release, which did fairly well on MTV.

Regardless of issues with various labels, Tuff continued producing new material throughout the 1990’s.  In 2001, Tuff released the album the History of Tuff, which included the song “American Hair Band”, which was a metal parody of the Kid Rock’s “American Bad Ass” song.  Thankfully, in 2015, the band released the album the Glam Years 1985 – 1989, which is a nice collection of the hair metal we love.  Tuff was still very active well into the 2010’s.  At the time of this writing, the Tuff Discography was as follow:

Listen for free or download any Tuff track for just 12 cents per song!