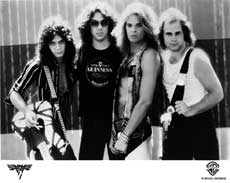 The Van Halen brothers (Eddie and Alex) were born in the Netherlands, which is where they started learning to play music.  Alex started out on guitar, Eddie on drums, and the two swapped early on after the realization they liked what their brother was doing better.

Many people do not know that Van Halen (the group) formed way back in 1972 in Pasadena, CA as a band called Genesis.  They started out as a threesome, and after realizing how much it would cost to rent David Lee Roth's sound system, they decided to let Roth join the band (they all went to high school together).  After changing their name to Mammoth (Genesis was taken, duh), Roth encouraged the band to change their name to Van Halen.  Van Halen soon became a huge local draw in the L.A. and Pasadena area.  They went from nobody's to holding the record as having the most number 1 hits on the Billboard Mainstream Rock charts.

Van Halen's big break came at a club called Gazzarri's, where an enamored Gene Simmons (Kiss) heard the band and decided to help them produce a demo.  Interestingly enough, when Gene took the demo to Kiss Management for further production, they turned him down saying the band had no chance to make it big.  I think Gene's hunch was right, what do you think?  By 1977, some Warner Brother's execs had a change to hear the band and quickly put them on the fast track to a record deal.  The band's initial self-titled release charted at 19 on the Billboard pop music charts.  Many of you will remember the song "Running with the Devil" from this album.

Several more hit albums quickly followed as tensions began to rise between Eddie Van Halen and David Lee Roth (both wanted to be the showboat).  Although things were hanging on by a thread, the band's 1984 release (1984) was their largest commercial success to date.  The album featured keyboards as a new staple for the band, included in the hit "Jump".  Other notable songs from this album included "Hot for Teacher" and "Panama".  It was about this time that Roth had ventured out with a solo project that widely popular ("California Girls", "Just a Gigolo"), and soon after, Roth was out and Sammy Hagar was in.

With Hagar on vocals, 5150 was released in 1986, an album that charted at number 1 on the Billboard Charts.  You might remember songs like "Why Can't This Be Love", "Dreams", and "Love Walks In" from this album.  Although subsequent Van Halen albums with Hagar on vocals did not do as well as 5150, they were still commercially successful.  By 1996, tensions once again began to rise for Van Halen.  The Van Halen brothers wanted to record two songs for the soundtrack for the movie Twister, and a greatest hits release album was currently in the works.  Hagar did not agree to either venture, and soon the Van Halen brothers were working with Roth again for two new songs.

This reunion between Roth and Van Halen was short lived, and it wasn't long before Roth was out and Gary Cherone (Extreme) was hired as the new vocalist.  Van Halen III was the only album released with Cherone, and it did have a couple of hits (you may remember the songs "Without You" and "Fire in the Hole".  Cherone left the band amicably in 1999, supposedly encouraged by Warner Brothers due to the lackluster performance of the album and lower tour attendance.

As the years have gone on, there have been reunions with both Hagar and Roth.  The latest reunion with Hagar was squashed due to Eddie's drinking problems, and supposedly the latest Roth reunion is on hiatus because these old guys need a rest.  As of 2012, Van Halen (with Roth on vocals) released the album A Different Kind of Truth, which is actually more or less old school (pre 1984) Van Halen.  A great album.  Unfortunately, we at ilovethe80s.com had tickets to the show for a midwest concert that was canceled.  We are waiting to see what happens.  At the time of this writing, the Van Halen Discography was as follows: