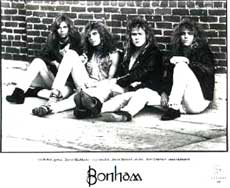 In 1989, Jason Bonham, son of the late Led Zeppelin drummer John Bonham, started his own band.  The band’s first released (1990) was titled The Disregard of Timekeeping and featured the cool song “Wait For You”.  We realize that technically this was not the 1980’s, but Bonham had such a cool Led Zepplin style sound, we felt like we had to include them here.

After a lengthy tour to support their first release, Bonham began to self-destruct.  Although they managed a follow up in 1992 (Mad Hatter), it was not long after that the band split up.  Jason Bonham worked on other projects after the breakup, including a band called Motherland, the Jason Bonham Band, Healing Sixes, and others.  The Bonham Discography is as follows: