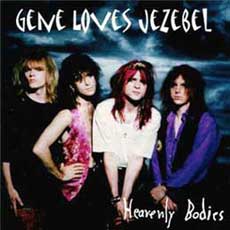 Gene Loves Jezebel was a British rock band that was formed in 1980 by twin brothers Jay and Michael Aston as a band called Slav Aryan.  The band released their first single and demo in 1982.  After landing a record deal, their first album (Promise) was released in 1983 (charted at no. 8 on the UK Indie Charts).  Subsequent releases did well on the Indie Charts as well.  Some of the songs you may recognize include “Screaming for Emmalene”, “Bruises”, “Influeza (relapse)”, “Shame (Whole Heart Howl)”, “Cow”, “Desire”, “The Motion of Love”, “Jealous”, and “Josephina”.

The musical style of Gene Loves Jezebel is hard to describe.  It ranges from pop to hair metal.  We were first introduced to the band when we heard one of their songs (“Wild Horse”) on the XM radio station “Hair Nation”, which is why we almost included them in that section of this site.  After downloading their greatest hits album, we were treated to an eclectic mix of what we can only describe as doper music.  However you describe it, the music of Gene Loves Jezebel is addicting, and the band has become one of our favorites.  The Gene Loves Jezebel Discography is as follows:

GENE LOVES JEZEBEL “The Motion Of Love” US Promo Only Album Flat (Poster)
$0.99