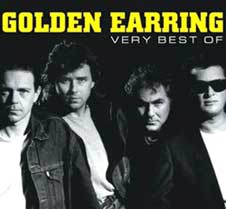 The Dutch band Golden Earring is probably better known for their early 70's success, with the hit song "Radar Love" in 1973.  We include them here because of their early 80's contribution to the top 40.  The roots of the band can be dated back to the early 1960's as a band called The Tornados.  They changed their name to The Golden Earrings, and later to just Golden Earring.

By 1965, Golden Earring was hitting the charts in places like the Netherlands.  In the 1960's, the greater majority of their success stayed in Europe, but by the early 1970's, with songs like "Radar Love" in their repertoire, they found themselves on tour in the USA with opening bands like Kiss and Aerosmith.  Other 70's bands Golden Earring either opened up for or performed with included Led Zeppelin, Eric Clapton, Jimi Hendrix, King Crimson, The Doobie Brothers, Rush, and 38 Special.

Golden Earring had a resurgence in the early 80's with the release of the album Cut in 1982.  This album featured two hits songs:  "Twilight Zone", which was rotated heavily on MTV, and "The Devil Made Me Do It".  Some of you will also remember their hit song "When the Lady Smiles", from their 1984 follow up album N.E.W.S.  They had a couple of more releases in the 80's, but were unable to capitalize on their stateside success.

As the years rolled on, Golden Earring continued their success outside of the USA.  At the time of this writing in late 2013, the band had not toured outside of Europe since 1984, yet were still producing new music and performing on stage.  The Golden Earring Discography is as follows: