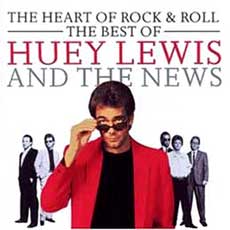 Hugh Anthony Cregg III, aka Huey Lewis, learned to play the harmonica while waiting on the road as a hitchhiker in the late 1960's.  After stowing a ride on a plane bound for Europe, he found himself bouncing around and playing his harmonica in countries like Spain and Scotland.  After earning enough money for a plane ticket back home, he enrolled in the Engineering school at Cornell University.  After meeting some other musicians at Cornell, Huey Lewis decided to quit school and pursue music (among other things, such as carpentry and landscaping).

In 1971, Huey joined a San Francisco band called Clover, and then changed his name to Hughie Louis (obviously this name evolved over time).  After a few album releases in the 1970's, Clover disbanded in 1978.  After a gig playing harmonica for Thin Lizzy (as Huey Harp) and some other small paying bits as a band called Huey Lewis and the American Express, Huey landed a deal with Phonogram records and "Huey Lewis and the News" was born.

Huey Lewis and the News released their self-titled debut in 1980, but it wasn't until their 1982 release of Picture This that the band began hitting the charts.  Many of you will remember the Top 40 Hit "Do You Believe In Love" from this album.   By far their best selling album was 1983's Sports, an album which ranks as one of the best selling pop releases of all time.  Hit songs from this album included "Heart & Soul", "I Want a New Drug", "Walking On a Thin Line", "If This is It", and "The Heart of Rock & Roll".  It wasn't until 1986 that Huey Lewis followed up with the platinum release Fore!.  Many of you will remember the hit songs "Doing It All for My Baby", "Hip to be Square", "Stuck With You", and "Jacob's Ladder".

All in all, Huey Lewis and the News would go on to release 14 top 20 hits.  And let's not forget his contribution to the movie Back to the Future (the songs "Back In Time" and "Power of Love" were from this album).  Since his heyday, Huey Lewis could be found on the silver screen, on T.V., on stage, and in studio.  At the time of this writing, the Huey Lewis and the News Discography was as follows: