Listen for free or download any Loverboy track for just 12 cents per song! 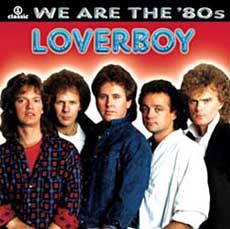 Loverboy formed in Alberta, Canada back in 1979.  The story goes that they originally called themselves "Cover Boy" to spite the magazine "Cover Girl", and the name was then changed to Loverboy.  The band's first public performance was opening for Kiss.  At first, U.S. labels shunned the band, and their 1980 self-titled release was produced on a Canadian label.   What was a huge hit in Canada became an even bigger hit in the USA.  You may remember the songs "The Kid is Hot Tonight" and "Turn Me Loose" from this album.  Loverboy went on to tour with bands like ZZ Top, Kansas, Def Leppard, and Cheap Trick.

In 1981, Loverboy followed up their freshman effort with Get Lucky, which was ultimately their best selling US album.  Many of you will remember the hit songs "Working for the Weekend" and "When It's Over" from this release.  You might also remember the hit songs "Hot Girls in Love" and "Queen of the Broken Hearts" from the 1983 release, Keep It Up.  Music videos for these two songs received heavy rotation on MTV.  But this wasn't it as far as hit songs went for Loverboy in the 80's.  Here are a few additional hit songs that might jog your memory:  "Nothing's Gonna Stop You Now" for the 1984 Olympic Games, "This Could Be the Night" and "Lovin' Every Minute of It" from their 1985 release (Lovin' Every Minute of It), "Heaven In Your Eyes" from the Top Gun soundtrack, and "Notorious" from their 1987 release (Wildside).

In 1989, Loverboy broke up due to artistic differences.  Many members went on to solo projects.  It was just a few years later and the band was back together in studio and on stage.  In 2005, the band celebrated 25 years together.  At the time of this writing, the Loverboy Discography was as follows:

Listen for free or download any Loverboy track for just 12 cents per song!