Listen for free or download any Nazareth track for just 12 cents per song! 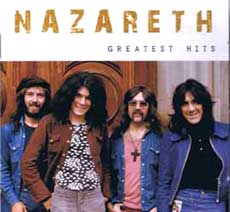 Nazareth was a Scottish band that formed way back in 1968.  The band named themselves after Nazareth, Pennsylvania, but before this, they were known as a local band called The Shadettes.  In 1971, the members of Nazareth moved from the stagnate music scene of Scotland to the bustling music scene of London where they released their debut album.

The band's follow up album, Exercises, was released in 1972.  The band went on tour with Deep Purple in support of this album, which featured the two UK hits "Bad Bad Boy" and "Broken Down Angel".  Nazareth's 1973 release, Loud 'N' Proud, featured the hit song "This Flight Tonight".  The band began its run in the USA with the 1975 release of Hair of the Dog, which featured the hit title song and the top 10 US hit "Love Hurts".  Nazareth continued releasing albums throughout the 80's, 90's, and beyond.  Other songs they have produced that you might remember include "Shanghai'ed in Shanghai" (1974), "My White Bicycle" (1975), "Holiday" (1979), and "Crazy (A Suitable Case for Treatment)" (1981 - movie Heavy Metal soundtrack).

Nazareth had an interesting influence on the band Guns 'N' Roses, as not only did Guns cover "Hair of the Dog" on their 1993 album The Spaghetti Incident, but Axel Rose also had asked Nazareth to play at his wedding (they declined).  Nazareth has continued to produce over the years.  At the time of this writing, the Nazareth Discography was as follows:

Listen for free or download any Nazareth track for just 12 cents per song!