Listen for free or download any REO Speedwagon track for just 12 cents per song! 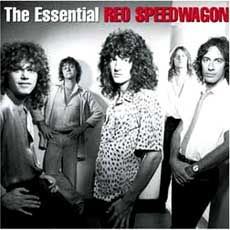 The roots of the band REO Speedwagon date back to the mid 1960's, when several University of Illinois classmates got together to form a band.  The band named themselves after the old flatbed truck by the same name (pictured).  "R.E.O." are the initials of the car's creator (Ransom E. Olds).  REO Speedwagon was a big hit on the midwest club scene, and by 1971, the band had signed a contract with Epic Records and released a self-titled album.  Some of you may remember the song "157 Riverside Avenue" from this album.

For the first few albums REO Speedwagon produced, they switched vocalist three times, eventually landing with Kevin Cronin, the signature voice we recognize today.  REO Speedwagon released 9 albums in the 1970's, including a live release that went platinum.  Songs you may remember from this decade include "Ridin' the Storm Out" (Ridin' the Storm Out, 1973), "Keep Pushin'" (R.E.O., 1976), "Roll with the Changes" and "Time For Me to Fly" (You Can Tune a Piano, but You Can't Tuna Fish, 1978).

It was the 1980's that REO Speedwagon began meeting with real success.  In 1980, the band released the album Hi Infidelity, which was a departure from their hard rock days to more of a pop rock sound.  This switch proved to be very successful for the band, as this album featured four hit songs:  "In Your Letter", "Don't Let Him Go", "Take It On the Run", and "Keep On Loving You".  This album was in the charts for 65 weeks, and number 1 for 15 of those weeks.  In 1982, the REO Speedwagon followed up with the album Good Trouble, which featured the hit songs "Keep the Fire Burning" and "Sweet Time".  Wheels Are Turnin', their 1984 released, featured the songs "Can't Fight This Feeling", "I Do' Wanna Know", "One Lonely Night", and "Live Every Moment".  The band's 1987 release, Life as We Know It, did not do as well as previous releases, but still brought us the hit songs "That Ain't Love" and "In My Dreams".

By the late 1980's, the popularity of REO Speedwagon was waning, and some members began to leave the band to start other projects.  Since their heyday, REO Speedwagon has continued to produce new material and go on tour.  At the time of this writing, the REO Speedwagon Discography was as follows:

Listen for free or download any REO Speedwagon track for just 12 cents per song!

REO Speedwagon Set of 4 Buttons New On Card Keep On Loving You
$10.70