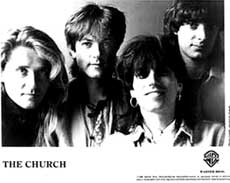 The New Wave, progressive rock band The Church formed in Sydney, Australia way back in 1980 by vocalist/bassist Steve Kilbey, Peter Koppes on guitar, and Marty Wilson-Piper on guitars.  They originally started out as a band called Limosine before changing it to The Church.  After producing a demo tape and submitting it to an Australian label, the song "Chrome Injury" caught the label's attention and garnered the band a record deal.

The Church debuted in 1981 with Of Skins and Heart.  The song "The Ungaurded Moment" did chart in Australia, and the band subsequently went on tour.  This album was later re-packaged and release on a new label in 1982 as The Church.  Also in 1982, The Church released their second album, The Blurred Crusade.  The album peaked at no. 10 and featured the hit song "Almost with You".  The Church continued their success in Australia, but had trouble breaking the American market.  Seance, released in 1983, was conisdered by many to be a bit of a departure of The Church they knew an loved, but some other's praised the album.  In 1984, The Church settled for releasing two EPs in Australia and New Zealand:  Remote Luxury and Persia.  In other parts of the world, these two albums were repackages as Remote Luxury.  Regardless, album sales and concert attendance was declining.  The group decided to take a short hiatus.

By 1986, The Church was back and Heyday was released.  The album did fairly well worldwide, but The Church began finding their popularity growing outside of Australia again.  The band moved to Los Angeles and released Starfish in 1988.  It was this release that featured the worldwide hit song "Under the Milky Way," which charted at no. 2 in the USA.  After the lackluster reception for their 1990 release, Gold Afternoon Fix, The Church moved back to Australia.  The band has continued their activity since the heyday of the 1980's, both in studio and on stage.  In 2012, they were even back on tour with Simple Minds and Devo.  At the time of this writing, The Church Discography was as follows: