Flock of Seagulls, A 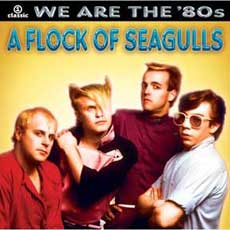 The band A Flock of Seagulls was formed in Liverpool by brothers Michael and Ali Score in 1979.  It would probably come of little surprise that Michael was a hairdresser during the day and musician at night.  In the early days, the band actually practiced on the floor above Mike Score's hair salon.  Although their success was early in the 1980's, and they are often made fun of for their wild hair, they were a pioneering band.

After landing a record deal in the early 1980's, A Flock of Seagulls released an EP called Telecommunication, and two singles from the EP, the title track of which garnered them some early success and a major label record deal.  The band's first full album, a self-titled release, was released in 1982 and featured the mega-hit song "I Ran (So Far Away)".  This song, and the subsequent video, was so popular, it was on a 10 minute rotation on MTV at one point.  Some of you may also remember the song "Space Age Love Song" from this release.  In 1983, A Flock of Seagulls released teir second album, Listen, which featured the UK hit "Wishing (I Had a Photograph of You)".  Although they released to additional albums in the 1980's, The Story of a Young Heart (1984), and Dream Come True (1986), they were never able to re-capture the success of 1982.

It was not long after that the band split, for all intents and purposes, although Mike Score did continue touring and producing under the band's moniker.  In the early to mid 2000's, the original band members re-united from time to time for new recordings and one-off concerts.  The A FLock of Seagulls Discography is as follows: