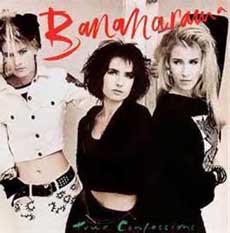 Bananarama was an all female band formed in London, circa 1979, by girlfriends Siobhan Fahey, Keren Woodward, and Sara Dallin.  Prior to formation of the band, the ladies found themselves singing backup for punk rock bands such as Iggy Pop, The Jam, and Department S.  With the help of some former Sex Pistols band members on their first demo, Bananarama inked a record deal in 1981.

Bananarama released their first single in 1982 ("Really Saying Something"), which featured guest stars Fun Boy Three.  Previously, the ladies of Bananarama had participated in Fun Boy Three's hit song "T'aint What You Do (It's the Way That You Do It)".  It was the seven years between 1982 and 1989 that Bananarama experienced the greatest mainstream success.  The group had numerous hits.  Songs you may remember include "He Was Really Sayin' Somethin", "Shy Boy", and "Na Na Hey Hey Kiss Him Goodbye" from Deep Sea Skiving (1983),  "Robert De Niro's Waiting" and "Cruel Summer" from their self-titled release (1984), "The Wild Life" from the movie soundtrack for The Wild Life (1984),  "Venus" from True Confessions (1986), and "I Heard a Rumour" from Wow! (1988).

After the release of their 1988 album, Fahey left the band while the other two ladies brought in Jacquie O'Sullivan and carried on.  After O'Sullivan left the band, Dallin and Woodward continued on as a duo.  Bananarama continued producing throughout the 1990's and beyond, although the glory days were over.  Their last hit song, at the time of this writing, was "Look on the Floor (Hypnotic Tango)" from their 2002 release, Drama.  At the time of this writing, the Bananarama Discography was as follows: