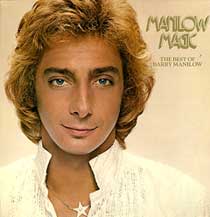 Barry Alan Pincus (aka Barry Manilow) was as big a hit in the 70's as he was in the 80's.  Manilow was his mother's maiden name, a name he adopted at his Bar Mitzvah.  In fact, in 1978, five of his albums were best sellers at the same time, which few musicians have been able to replicate (Frank Sinatra and Michael Jackson are on that short list, for example).  Manilow has had so many top 40 hits over the years, it is not feasible to list them all here.

In the 1960's and early 70's, Manilow worked as a commercial jingle composer and performer.  He was involved with jingles from State Farm, KFC, Pepsi, Dr. Pepper, McDonald's, and so many more.  By 1970, Manilow was being used by Bette Midler as both a piano player and producer.  Manilow's first solo album, a self-titled album, was released in 1973.  By 1974, Barry Manilow II was released, which featured the hit song "Mandy".  This song started a run of 70's hits for Manilow, including songs like "Weekend in New England", "Ships", "Looks Like We Made It", "Can't Smile Without You", "Ready to Take a Chance Again"," I Write The Songs", "Ready to Take a Chance Again", and "Copacabana".  Manilow was also a popular feature on network television, including several television specials and the made for TV movie Copacabana.

During the 1980's, Manilow continued cranking out the hits:  "The Old Songs", "Somewhere Down the Road", "Read 'Em and Weep", and "I Don't Want to Walk Without You".  After the early 1980's, although Manilow stayed very busy, he never hit the top in the same way again.  This isn't to say that he dropped off the music planet.  He continued performing, releasing, and even acting as the years rolled on.  At the time of this writing in early 2013, the Barry Manilow Discography was as follows: